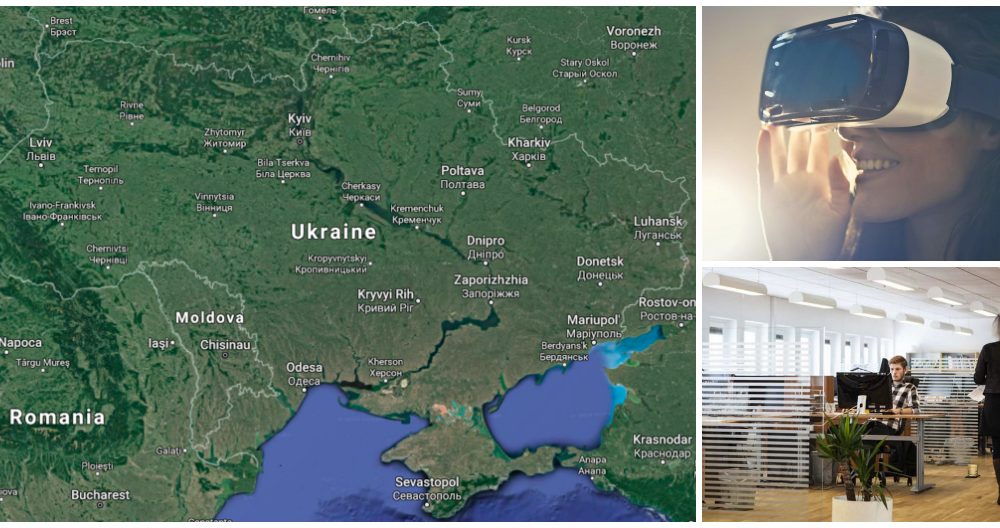 Slack, Alibaba, WhatsApp — all of these brands built their core products with the help of outsourcing companies. Outsourcing has long become integral to commercial software development, with tech giants hiring contractors from South America, Asia, and Eastern Europe.

Strangely enough, overseas software providers often market themselves as “IT outsourcing” companies. This is especially relevant for Eastern Europe and, in particular, Ukraine where “IT” is basically a synonym for “software development”.

Linguistic intricacies aside, Ukraine is actually turning into a first-class software outsourcing destination for western brands. Numerous tech brands have already tapped into the country’s talent pool of more than 50,000 professional software engineers. It’s these brands that we’ll explore in this article. Check out the quick rundown in the table below or scroll further for reviews of outsourcing examples.

LG is a brand that hardly needs an introduction. Best-known for mobile devices and TVs, the company ranks among the top-10 smartphone manufacturers of 2018. LG is also in the top 5 in the smart TV segment, with its webOS driving innovation in IoT. That’s where outsourced developers come into play.

Since 2015, LG has been using outsourced developers to perfect its webOS-based applications. The tasks contracted out to Ukrainian outsourcing companies include the optimization of power consumption and the performance of hardware drivers for smart TVs. In particular, Ukrainian software engineers wrote the system service interfacing with the kernel driver for hardware sensors.

Chances are your company is among the 35% of the world’s businesses that use Skype as a primary tool for day-to-day communication. Even 14 years after its release, Skype can boast 8.1 million monthly paying users. This figure alone looks impressive, and to an extent, outsourcing companies deserve credit for this achievement.

In the early 2010s, outsourced developers from Ukraine rose to the challenge of introducing Skype calls to 2G phones. Another major feature implemented by an outsourcing company was the click-to-call button for third-party websites.

Needless to say both of these projects connected Skype to thousands on new customers. But 2G support and click to call weren’t the only things that Skype was outsourcing to Ukraine. The company was also using outsourced developers while building the server-side logic for its mobile applications.

Microsoft: outsourcing the development of a corporate portal

Microsoft is among the global tech giants with offices in Ukraine. That said, the Redmond company was outsourcing development to local dev shops when establishing its presence in the country. The development of the corporate portal for Microsoft Ukraine was one of such projects.

According to the software engineers working on the portal, it aimed to automate most of the routine tasks for the Microsoft staff. Basically, it is as a feature-rich web application with a content feed for corporate announcements and updates, a forum, a calendar, and a document library. Other features include employee and event cards for the management of things like purchases, business trips, and lunch reservations.

Aside from being a paragon of good journalism, BBC has an solid reputation in tech circles. The BBC dev team authored Wraith, a once-popular tool for responsive screenshot comparison. In addition, the company can boast a solid expertise in React, Node, and other web development technologies. It’s this reputation of a tech leader that makes the case of BBC outsourcing development to Ukraine prominent.

The news publisher’s e-commerce department BBC Shop employed a Ukrainian outsourcing company to merge two existing online stores into a global e-commerce platform. The project took 6 months to complete and yielded a 110% revenue increase year over year. There was an efficiency boost, too. The time needed to put a new product online decreased from ~24 hours to under 5 minutes.

Here’s another case that a Ukrainian dev shop owner would call one of the big IT outsourcing success stories. A top-tier publisher entrusting the development of its content creation tools to an outsourcing company. Sounds like a dream job — and a huge responsibility.

As far as content creation goes, Buzzfeed produces 700+ posts every day. It also has 200 million unique users coming to its media properties every month. The development of a content creation tool able to keep up with such pace and scale is no trivial matter. It required a full-sized team of outsourced developers and QA engineers. By outsourcing development, Buzzfeed got this team for a fraction of the price it would payfor local talent.

For The Economist, outsourcing to Ukraine is a strategic matter. The media company didn’t just commission the development of an application or some content management tools. Instead, it sought a long-term partnership with an outsourcing company able to fuel its digital transformation.

This case reflects one of the IT outsourcing trends that have grown popular in the past decade. Today, tech companies aren’t outsourcing isolated projects as much as they used to in the early 2000s. Instead, they seek to establish dedicated offshore teams or find talented individuals to join them as long-term remote contractors.

Speaking of other IT outsourcing examples involving news publishers, Reuters hired a Ukrainian outsourcing company to design an iPad app for The Wider Image.

In 2012, The Wider Image app won multiple 2012 Lovie Awards. It also broke into the IXDA Awards shortlist in 2013. Turns out outsourcing UX development can result in an acclaimed product, after all…

Automotive is really a big market for Ukrainian IT outsourcing. The country’s dev shops enjoy a healthy demand from automotive brands outsourcing various software development tasks that range from embedded to mobile. It was the latter that drew the attention of Jaguar Land Rover to Ukrainian outsourcing companies.

The mobile app in question is JRL Talk, an iPad application for multilingual chats and calls. It’s also an enterprise app that Jaguar Land Rover uses internally. The app offers automatic real-time translation of chat messages, with speech-to-text and text-to-speech for calls between speakers of different languages. JRL Talk supports 16 languages and enables conference calls between up to 5 people.

Harley Davidson makes for another good example of outsourcing mobile development in automotive. Again, we’re talking about an application for internal use.

The motorcycle giant was using outsourced developers to create an app facilitating lead capturing at conventions and exhibitions. The goal set before the project was to reduce the time and costs spent on creating leads at biking events.

The application offered an interactive showcase of bike customizations coupled with a bunch of lead-processing features and an SSL-backed solution for handling user data. In addition, Harley Davidson tasked outsourced developers with the integration the app with the company’s CRM. Reflecting the global nature of Harley Davidson’s brand, the application also supports over a dozen languages.

The Dollar Shave Club isn’t as big as other brands on this list, but it sure is a big commercial success. The company dominated ~60% of the American online market for shaving accessories in 2016 when Unilever acquired it for $1billion. That certainly warrants a mention among noteworthy outsourcing examples .

Speaking of outsourcing development, Dollar Shave Club was working with a dedicated team in Ukraine to build its new Android app. The new version of the application resolved a number of customer journey issues and introduced new features such as credit card scanning and gifts.

Needless to say these improvements didn’t go unnoticed. The new app helped increase the number of Dollar Shave Club members from 3,900 to over 500,000 people. Besides, the company processed over 400,000 orders placed via the new Android app in 2016.

Android users know Qualcomm as the manufacturer of the Snapdragon SoC. In the Apple realm, Qualcomm is the supplier of modems found in the some iPhones. The semiconductor company has other revolutionary products as well, and it worked with outsourced developers from Ukraine on some of these products.

One of the outsourcing examples involving Qualcomm and Ukrainian development shops, is the Snapdragon Digital Pen. Originally a surgical technology, the Digital Pen is a stylus that supports 3D gestures at a distance of up 40 cm away from the screen.

Another project that Qualcomm built in collaboration with Ukrainian outsourcing companies is a medical application for Snapdragon Sense ID. Sense ID is an ultrasound technology for precise fingerprint scanning. As for the application, it authenticates patients and doctors, providing them with a fast and safe channel for sharing medical data.

Guinness: development of a marketing app for Arthur Guinness Day

Programmers love beer, which is why the development of a Guinness app seems like an excellent way to celebrate the birthday of Arthur Guinness. A few years ago, the honor of doing exactly this belonged to a Ukraine-based outsourcing company.

The app requested by none other than the Guinness company was mostly for product marketing. It featured of neat visualizations with stats related to the famous stout beer brand, as well as a bunch of quizzes and minigames. Technology-wise, we’re talking about a native iOS app build with SQLite.

Whether you love or hate Crocs, the weird-looking foam clog sells like hell. Crocs has over 300 million sales on its record, and it has been closing 6 consecutive years with over $1 billion in revenues. The fact that a Ukrainian provider contributed to this success make for another noteworthy outsourcing example.

Crocs worked with remote developers to optimise its efforts of expanding its Salesforce Commerce Cloud network in South America, Europe, and Asia. The development of the websites powering this infrastructure was one of the projects delivered by Ukrainian outsourcing companies.

Ukrainian programmers made significant contributions to the Company’s core platform, too. Namely, Crocs has been outsourcing some of its backend development efforts to this country. Finally, the single page checkout that helped Crocs close some of those 300 million sales is also a software built in Ukraine.

While we’re only talking about 13 companies, our list of outsourcing examples could easily include other well-known brands. To name just a few, Ernst & Young, Deutsche Bank, Xerox, and Jabra have been working with Ukrainian software development shops. And there are quite a few reasons to follow their example:

Ukraine has other advantages over other outsourcing destinations as well. So if you’re searching for a country with a strong infrastructure for remote software development, check these 12 reasons for outsourcing to Ukraine.

If you’ve searching for a reliable contractor in Ukraine, contact us via the form below. We build apps that get featured on the React Native showcase, and our portfolio includes products from world-known tech leaders. Our expertise spans across enterprise, mobile, full-stack, and UI-development. We work with top-5% talent from Ukraine, and we can’t wait to hear about your product.