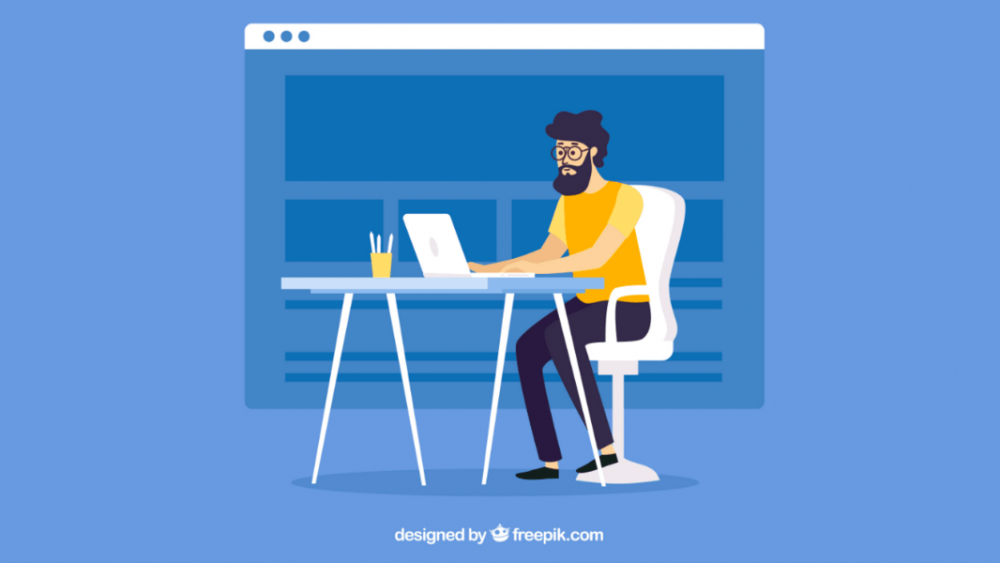 In 2018, front-end development is evolving faster than ever before. From Material Design to progressive web applications, to Angular 6, to React Fiber — there’s a whole lot going on in UI development. Let’s look at what’s made waves in 2018. Also, let’s take a look at what’s happening in JavaScript overall.

In 2018, JavaScript is Growing Strong

Six years in a row, JavaScript remains the most popular technology among professional software developers. The Stack Overflow survey of 2018 proves this: 71.5% of developers know or work with JavaScript. 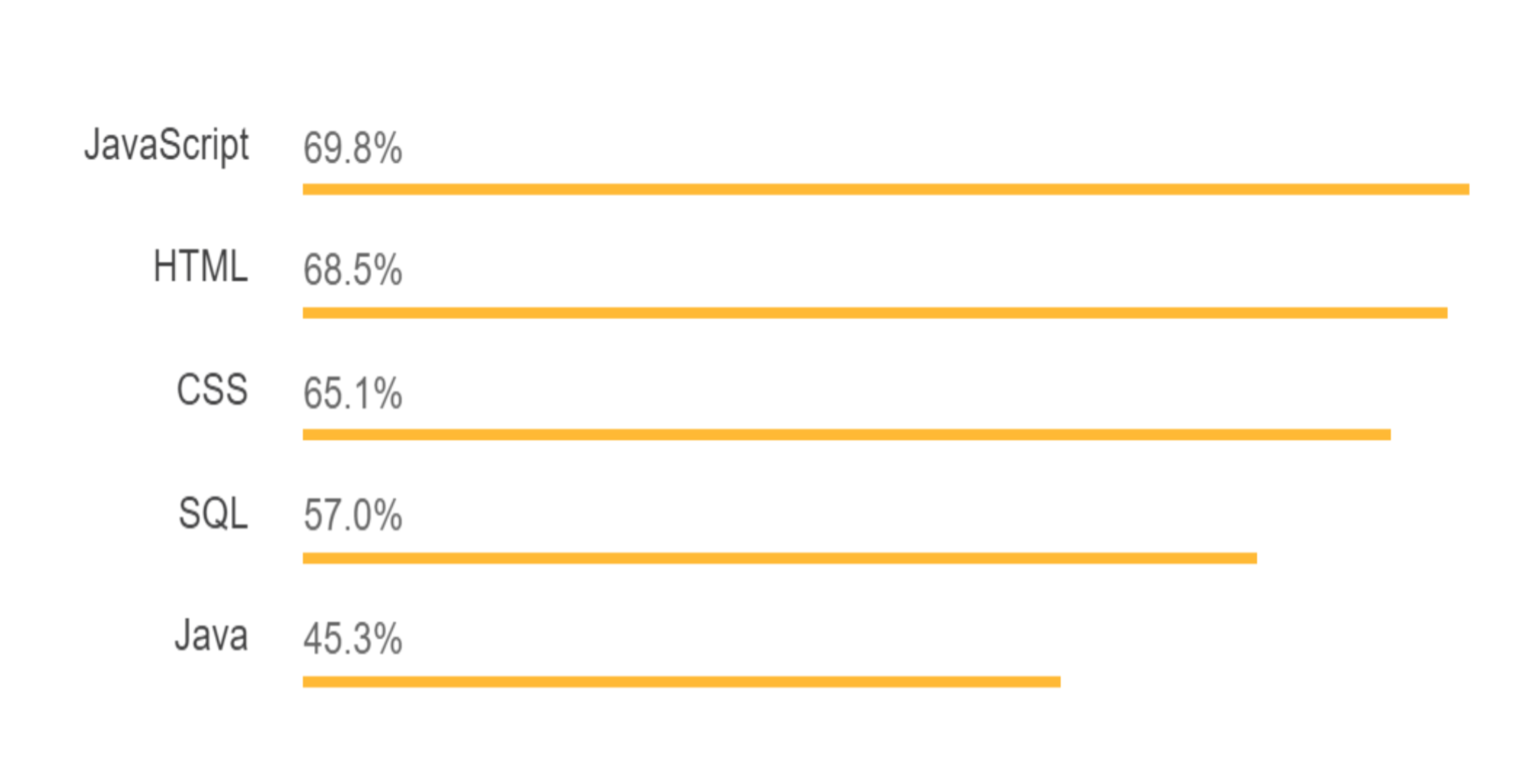 But it’s not just developers that drive the popularity of JavaScript. According to a survey by Indeed.com, JavaScript is one of the 3 most-in-demand skills among employers. Specifically, JavaScript is 3rd most-demanded language following Python (2nd) and Java (1st). 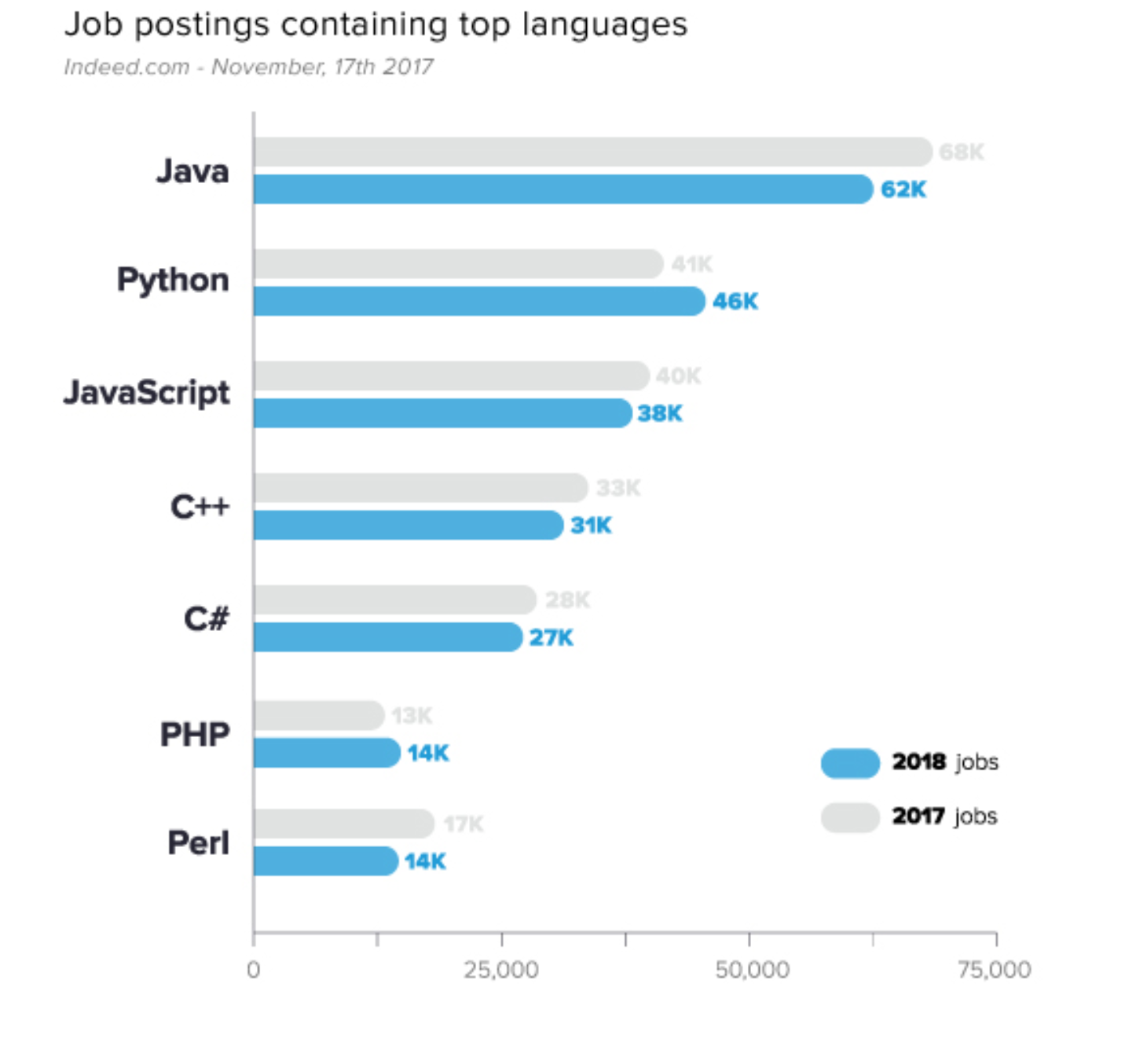 This growth of popularity isn’t all that surprising. JavaScript has a smooth learning curve, and it’s the de-facto standard in web UI development. What’s more, the language has gained a foothold in mobile, desktop, and server-side development.

Technically, the concept of PWA has been around since 2015, when Alex Russell and Frances Berriman coined the term. Still, it’s this year’s release of iOS 11.3 that made progressive web application relevant to every tech startup on planet Earth.

With iOS 11.3, Apple embraced Service Workers and the Web App Manifesto, the two specs underlying Google’s vision of progressive web apps. With this move, the Cupertino company effectively brought the support for PWAs to the iPhone and iPad. A small step for Apple, one giant leap for web applications.

Today, Progressive Web Apps are inherent to the digital strategies of a number of global brands including Forbes, The Washington Post, and Alibaba. The latter built its progressive web application in 2016. The move reportedly increased the conversions across browsers by 76%. Alibaba also quotes a 30% growth of user activity on Android and a 14% increase on iOS.

All in all, PWAs offer a richer, app-like user experiences on the mobile web. The presence on the home screen is yet another reason why companies may want to consider this technology in 2018 and beyond.

Over the past few years, Google has been working hard to encourage web developers to embrace Material Design, its signature design language. It seems that in 2018, the search giant is starting to work smart. Here are two important key steps that Google is taking to entrench its material paradygm into the design-development workflow of companies:

Making material more relevant for designers is a move that has a significant impact on front-end development. Google is going out of it’s way to make sure that in 2019, we’ll all be building Material web application. Will the company succeed in pursuing this goal? Time will tell.

The State of JavaScript Frameworks and Libraries

Using GitHub statistics as an indicator, React, Angular and Vue remain the most popular front-end frameworks in 2018. At the same time, the interest in Backbone and Ember is on the decline. 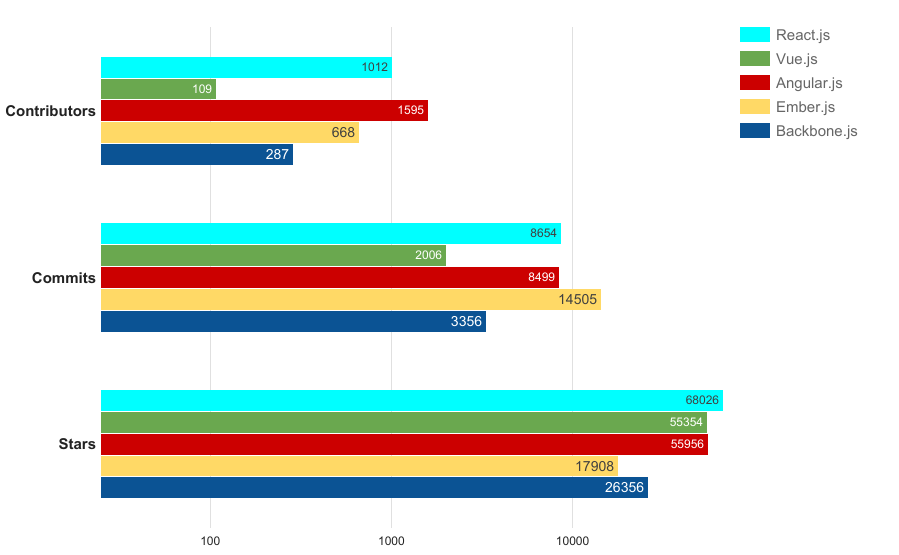 So why are React, Angular, and Vue so popular?

Let’s compare the top-3 technologies relying on the number of downloads and features that won developers’ interest.

So how does React gain the engineers’ appreciation?

First, this library’s focus on the use of Virtual DOM is great for the rendering of complex frequently updated user interfaces. Second, React Fiber, an internal engine upgrade announced last year, offers another fundamental improvement of the UI elements rendering. Third, the declarative architecture and the unidirectional data flow make for a productive way to build web apps. In fact, it was React that made declarative UI architectures a thing — and the trend is now inherent to cross-platform mobile frameworks like React Native and Flutter.

Sure, every UI framework has its drawbacks. In the case of React, developers tend to complain about the somewhat chaotic state of the documentation. With that said, this situation stems from the huge speed at which the React ecosystem is growing and evolving.

The evolution of the Angular ecosystem seems to have plateaued in 2017–2018, with the latest release focusing on incremental improvements. Released in April, Angular 6 improves the toolchain rather than the underlying framework.

The news aside, a huge part of the awesome factor behind Angular is how different it is from React. It’s not a library but rather, a full-fledged MVVM framework that offers a comprehensive approach to building complex feature-rich web applications.

The framework allows for a relatively simple integration with third-party libraries. What’s more, its use of two-way data binding streamlines the development of fast, responsive UIs with lots of animated elements.

Speaking of drawbacks, one thing that developers frequently point out is the risk of battery drain on mobile. With that said, there are well-known best practices and workarounds that can help you optimize battery usage. Another potential drawback is the steep learning curve. The extensive documentation of Angular often seems overwhelming to newcomers. In fact, less-experienced JavaScript developers might spend up to 1.5–2 months learning the framework and its extensive documentation.

Github statistics confirms the popularity of Angular: the number of downloads exceeds 800,000, and the total growth of downloads last year was 102.6%. As of today, around 450K people search for the word “Angular” per month.

Three years ago, you wouldn’t even imagine that Vue could compete with the skyrocketing popularity of React. But the fact is that today, the library is among the three most popular front-end tools of 2018.

So what’s the secret sauce behind the success of Vue’s?

For starters, Vue offers the flexibility which is totally comparable to that other mainstream UI frameworks. But the real ace up Vue’s sleeve is its smooth entrance threshold.
Many developers will agree that the learning curve of React is quite steep, more so in the case of Angular. In fact, it was the complicated nature of Angular that prompted Vue’s founding father Evan You to create a new JavaScript library. As a result, Vue is simple enough to be picked up by junior web developers.

Features-wise, Vue is declarative, and it offers maintains asynchronous DOM updates and two-way data binding. All of this makes for a faster and more productive UI development process.

Talent supply and demand are two huge factors determining the trends in front-end development. Let’s see what the state of the job market is in UI development in 2018.

Almost 37.8% of tech specialists identify themselves as front-end developers (according to the survey from Stack Overflow Stack Overflow). While this number looks impressive, it actually indicates a relative shortage on the supply side of the talent market in UI development.

This June, CIO.com listed front-end development among the three most-demanded specialisation in tech, along with full-stack development and .Net development. Moreover, the online magazine names JavaScript developers the most-demanded software development specialists in 2018. Speaking of costs, iSymmetry reports that the salaries of UI developer in the US average at $80,987 on Glassdoor. The average for Indeed is $102,000.

Looking at the wider employment trends in software, 2018 is the year when retention in software peaked at 13% in the US. American developers also get three times more recruiter interest than average LinkedIn users.

In 2018, Stack Overflow found out that 59.8% of developers who have jobs, are still open to new opportunities. Another survey by LifeWork Solutions reports that nearly 70% of organizations have difficulties in replacing staff.

In such a tough environment, tech firms struggle to hire a qualified specialist and find effective ways to retain them.>/p>

How is it Possible to Attract and Retain a Front-end Developer 2018?

LinkedIn reveals what’s still important when you want to attract, retain and foster top talent in 2018:

The Best of Outsourcing

All the facts above indicate that companies face complexities when searching for developers. If that’s a challenge that your company has been dealing with lately, outsourcing can help you find talented engineers within weeks, not months.

Specifically, countries in Eastern Europe and Latin America have become the go-to destinations for US-based tech companies. Located in nearshore time zones, both regions offer enough overlapping working hours for productive communication and coordination. What’s more, both locations have thousands of talented engineers whose rates are about 60% of what you’d pay programmers in the US.

If your company is open to nearshore outsourcing, Dedicated Teams is a dev firm with years of experience in web UI development. We love React, Angular, and Vue, as well as older technologies like Ember and Backbone. Our JavaScript portfolio includes projects that use Node and products built with full JS stacks like MEAN and MERN.

If this sounds like something you need, contact us, tell us about your product, and remember to ask about our no-risk trial. Also, check out our Skills sections for what else we do, and our Portfolio for what we’ve already built.