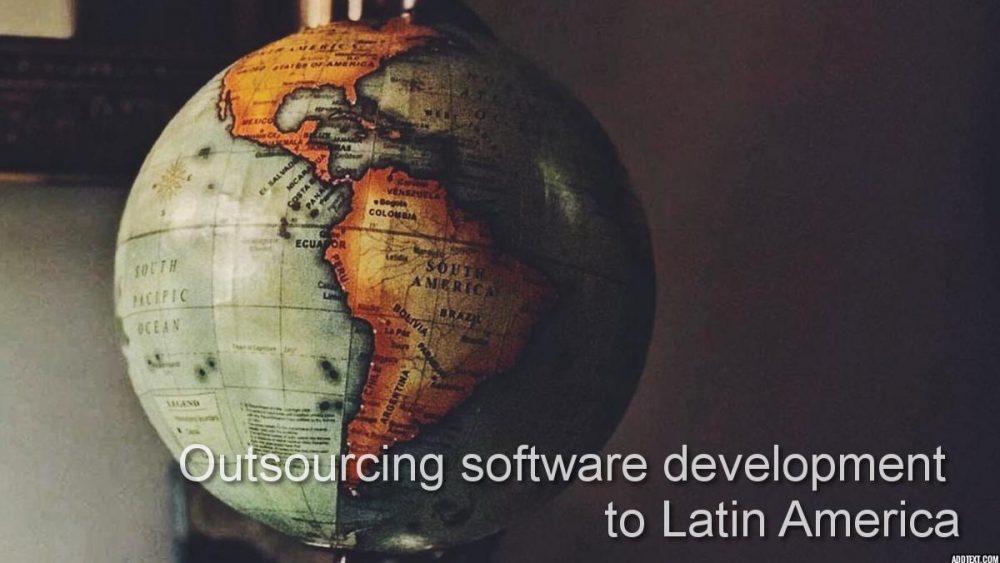 If you thought filming telenovelas is the fastest-growing market in Latin America, close but think again. As of 2018, Argentinian tech startups have earned $3.67 million, followed by the Peruvian companies with $2.79 million. Brazilian and Colombian startups have earned $2.28 million and $1.19 million respectively.

These figures prove that the software development industry in Latin America has considerable potential. And it’s not just local tech companies that underlie this great potential. Latin America’s geographic proximity to the US has made the region a strategic destination for software outsourcing.

This is especially true for the companies on the Pacific Coast where the time zone difference with other destinations leaves little chance for real-time communication and management. The West Coast is in the time zone that’s 8–10 hours different from major software outsourcing destinations in Central and Eastern Europe. For India, the difference is a massive 12.5 hours.

LatAm’s time zone alone could make the region the only sane choice for the West Coast-based tech companies looking to outsource. Yet, Latin America has other important advantages as well. Let’s take a closer look at these advantages to see how that spicy LatAm compares to other software outsourcing destinations.

The Number of Developers in Latin American Countries

Latin America has a relatively large pool of developers, which is why finding the right people shouldn’t take so long.

The 2018’s study from Stack Overflow estimates that the global programmer population has reached 21 million, students included. Out of these 21 million, more than 1 million are living in Latin America. See the chart below for approximate programmer populations of Brazil, Argentina, Mexico, Colombia, Chile, Perú, Ecuador, Venezuela, Costa Rica, Uruguay, and Bolivia.

The Number of Software Developers in Latin America 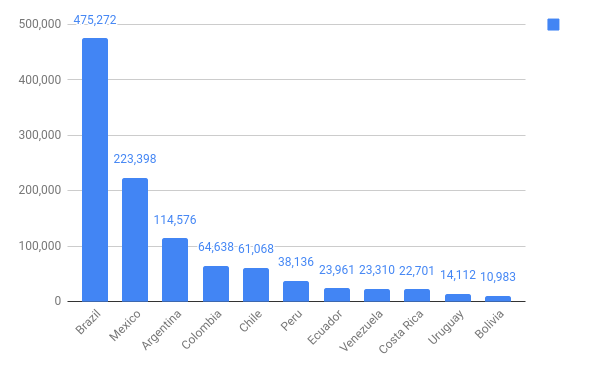 True, these numbers mean little unless we know how they compare to other countries. Here are charts featuring the programmer populations of major destinations in Eastern Europe and Asia.

The Number of Software Developers in Eastern Europe 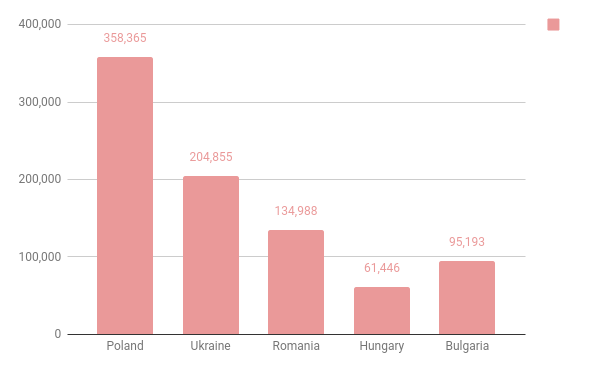 The Number of Software Developers in Asia 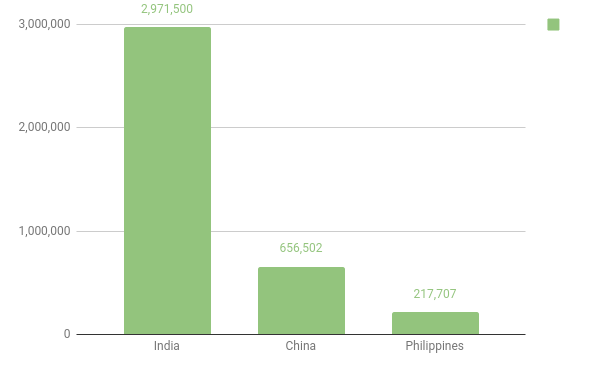 Speaking of whether the figures from Stack Overflow are reliable, ComputerWorld estimated that there were 18.2 million software developers in 2017. Considering the year-over-year growth and including students, this number is not all that different from the 21 million estimated by Stack Overflow.

Everybody knows that more doesn’t always mean better. So how do you ensure that you’re going for both more and better when outsourcing software development to Latin America?

One way to see how good the developers are in a particular destination is by checking how TopCoder, HackerRank, and similar charts rank that destination. Of course, programmer rankings aren’t everything, but they’re good enough for a high-level picture. So how do LatAm countries perform in these rankings?

Argentina, Brazil, Peru, Colombia, and Mexico are on the TopCoder Country Rank in 2018

What’s makes TopCoder a great chart is the fact that it updates regularly. The chart always displays the data from the last 6 months, so let’s see how LatAm developers performed in Q1 and Q2 of 2018:

If you’d like to know what countries won the top spots in the TopCoder’s leaderboard, here is the screenshot of the chart from September 2018: 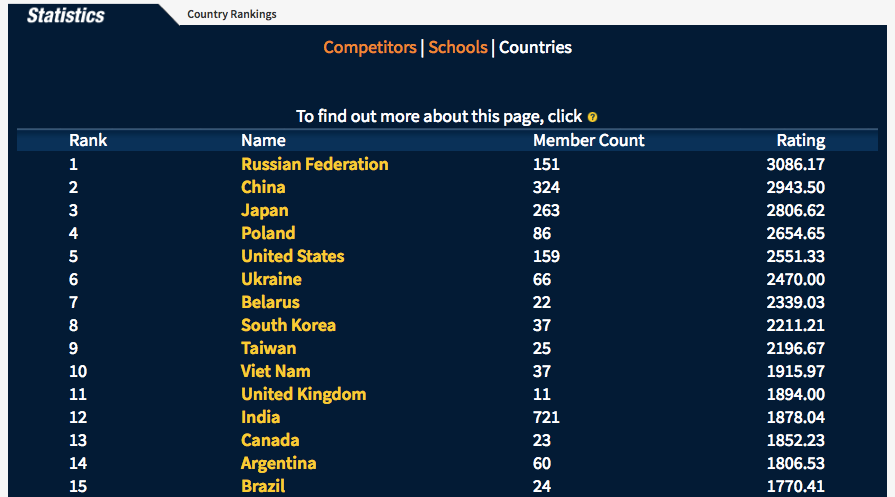 Chile, Brazil, Argentina, and Colombia Ranked in the HackerRank Programmer Olympics in 2016

HackeRank published the results of its Programming Olympics in 2016, and a lot might have changed since then. Nevertheless, HackerRank has a massive community of 6 million people, which makes it a must-include in our article. 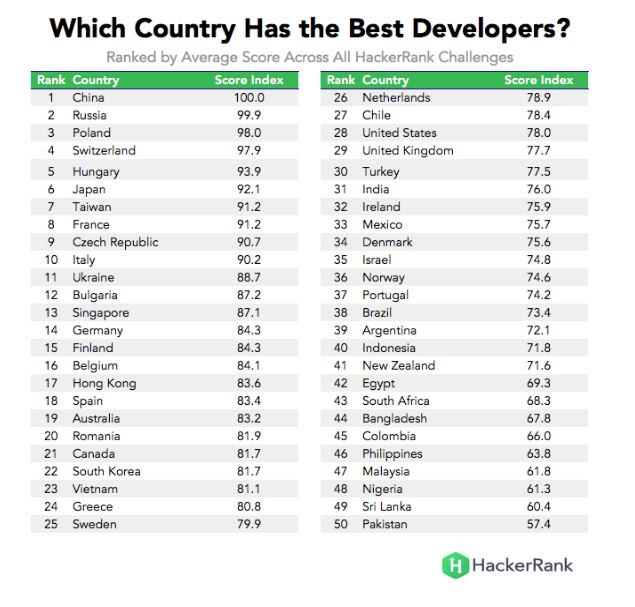 Note that the countries from both charts are also the destinations with large developer populations. The more developers and dev shops there are, the higher the competition — and the pressure to deliver better services and results for the same price.

It’s no secret that “How much?” is the cornerstone question in software outsourcing. Costs are a significant deciding factor for 97% of CEOs and CTOs, and one of the main reasons why companies outsource. 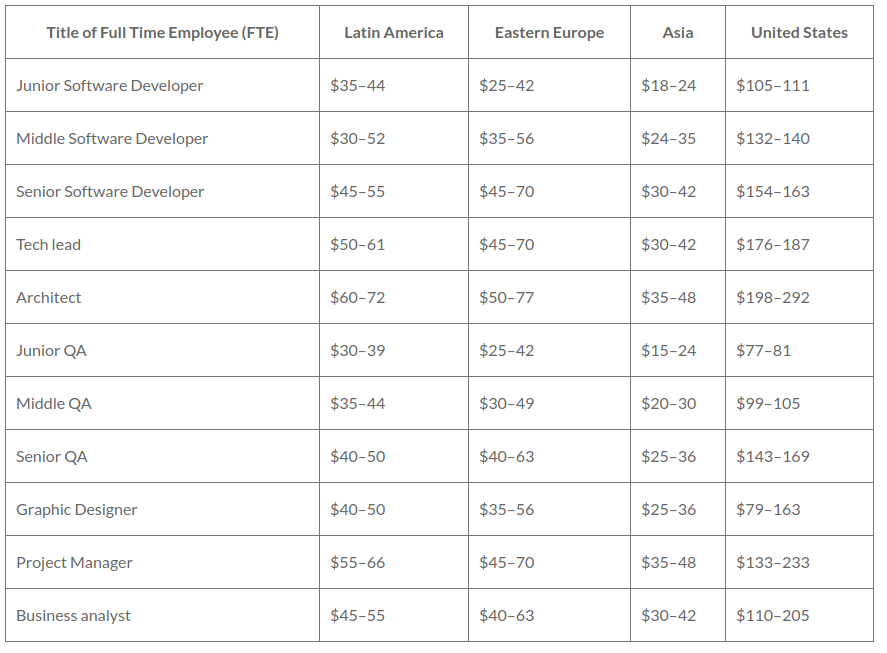 On average, Latin American engineers earn a little over 60% of what you’d typically pay US-based programmers with the same skill set and seniority. This is more expensive than in Eastern Europe or Asia. With that said, the difference in price buys you a nearly full overlap of working hours with the US, and that might be crucial for some businesses.

If you’re looking for examples of well-known brands outsourcing software development to Latin America, the list is pretty huge. First, there are globally recognized technological giants like Microsoft, Google, Amazon, IBM, Dell, Hewlett-Packard, Verizon, and Comcast. Tech-intensive media companies like Disney, Netflix, and Discovery are also on this list, as well as brands like FedEx and Unilever.

The LatAm region also boasts a rather high Internet penetration index of 67%, 13% higher than the global average, and 19% higher compared to Asia. The Global Connectivity Index of the key outsourcing destinations in Latin America is also quite impressive: 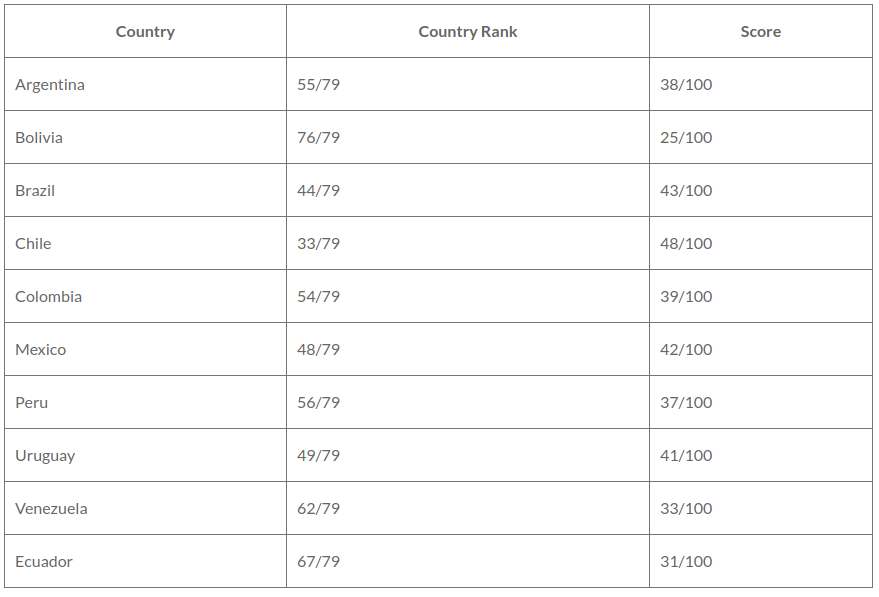 In case you need a better perspective, India ranks 63rd out of 79 countries and has a score of 33 (out of 100). The Connectivity Index of countries like Brazil, Argentina, and Mexico doesn’t differ much from top outsourcing destinations in Eastern Europe:

The LatAm region is investing a lot of effort in fostering the growth of its software development talent. Here are three examples of what Latin American countries are doing to increase their software outsourcing potential:

We’ve already mentioned that Latin America’s geographic location and time zone are beneficial for outsourcing partnerships with the US. In theory, this geographic proximity should contribute to the English language proficiency in the region.

The reality, however, is a little different from what you could expect. Compared to Europe and Asia, the EF English Proficiency Index of Latin America is a little lower:

It should be noted that averages aren’t necessarily indicative of what you can expect from software developers. English is the second most important skill for most programmers. As a result, English proficiency of hirable developers is higher when compared to the general population of a particular country. Moreover, some Latin American countries (like Argentina) has an index comparable to Europe’s average (56.51 vs 55.96). 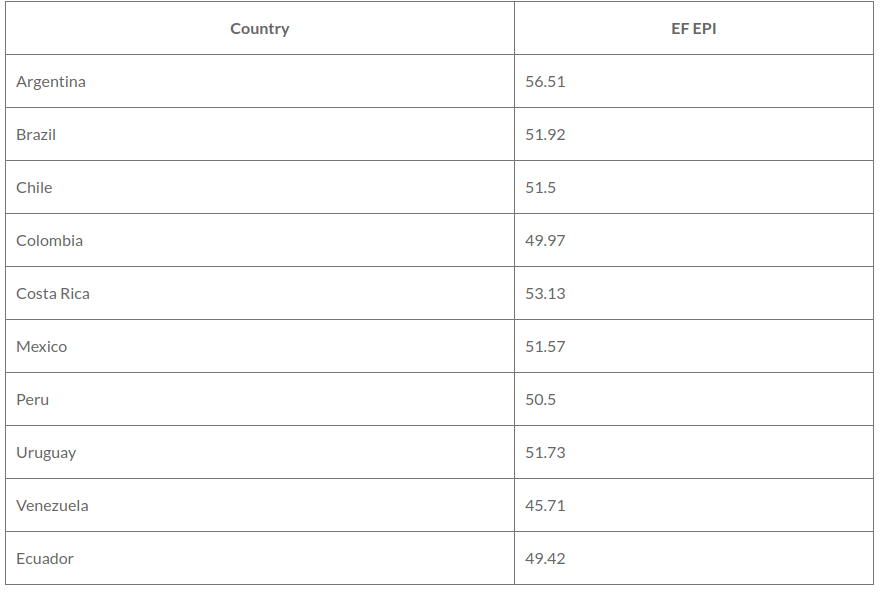 Summing it all up, the benefits of outsourcing software development to Latin America don’t just come down to geographic proximity. Other important factors to consider include:

What Latin American Country Would You Choose?

Beyond any doubt, Latin America is growing rapidly with Brazil, Argentina, and Mexico leading the way. Out of the three, Brazil has the largest number of developers, followed by Mexico and Argentina respectively. Mexico is in the closest proximity to the US, while Argentina offers a better overall English proficiency.

If you’re looking for software development experts from Latin America, and Argentina in particular, DedicatedTeams can help you reach the top-3% talent from the region.

Here are just a few reasons why to choose our company as software outsourcing partner:

Do you want to learn more? Contact us and enquire about our love-us-or-don’t-pay trial.