Offshoring vs outsourcing: key differences, pros and cons, and other essentials 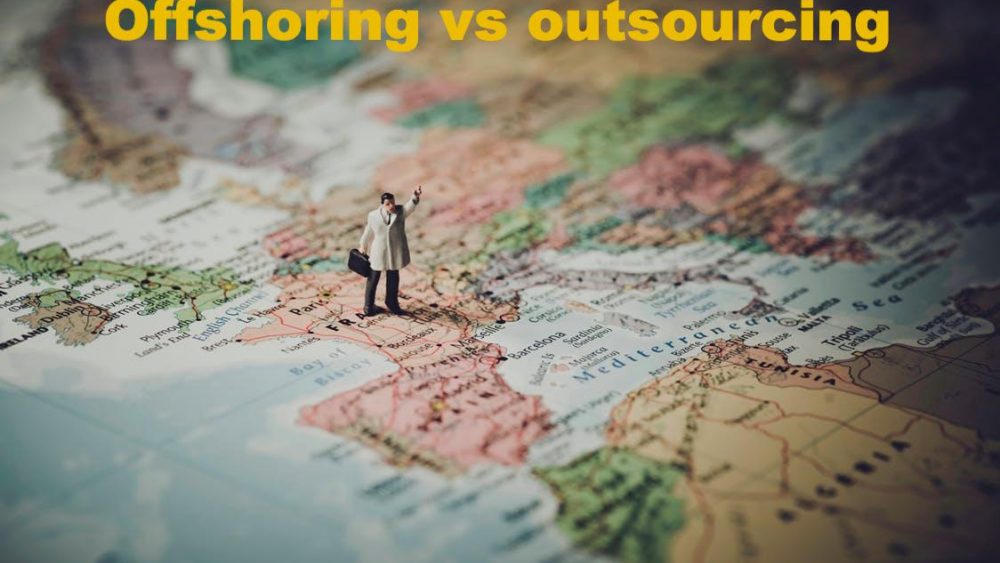 Offshoring vs outsourcing is a dilemma that emerges before many companies that seek to optimize their development. Ironically, people often confuse these two terms, more so when it comes to software outsourcing and offshoring. For the sake of clarity, let’s take a closer look at the two models.

In this post, we will explore the key differences between offshoring and outsourcing. We will also cover a couple closely related terms like nearshoring and dedicated teams. Without further ado, read on.

Offshoring your services and production — what is it all about?

In a broad sense, offshoring essentially boils down to the relocation of a company’s business processes to a remote geographical location. In the context of software production, offshoring mostly means moving development, QA, R&D, or other operations abroad.

A typical reason to offshore is expenses reduction. Namely, hiring remote developers from Eastern Europe or South America can be up to 50% more cost-effective as compared to US-based developers. In some cases, offshoring to India or China might prove an even cheaper option.

The term can imply an internal process where a company offshores its own resources without hiring third-party providers of offshoring services. More often than not, however, offshoring involves hiring or partnering with a third-party company that will help you establish remote infrastructure in a new location.

Nearshoring — a smarter way to offshore services and product development

Nearshoring is a practice of offshoring to a country that is not as remote as an offshore location. For instance, a country located in Western Europe can nearshore its business processes to Easter Europe rather than offshoring it to India.

Choosing nearshoring over offshoring helps companies reduce the time gap between offices, winning you more time for communication and coordination activities. This can be crucial for distributed development teams that need to coordinate their daily work during scrum meetings. Besides, a closer location typically means fewer cultural differences, which may contribute to streamlined cooperation.

On the other hand, nearshoring may be a more expensive option compared to offshoring. Still, “more expensive” doesn’t have to mean “less cost-effective”. As a rule, the advantages of nearshoring outweigh the slightly higher price.

IT outsourcing solutions in a nutshell

In essence, outsourcing comes down to hiring another company to handle some of your business processes. In many ways, outsourcing overlaps with offshoring or nearshoring — especially if we’re talking about software outsourcing and offshoring. But here’s the key difference: even though the term ‘outsourcing’ often implies hiring someone from a different country, it’s not a must.

Theoretically, one company can outsource some of its operations to another company located in the same region. When it comes to software development, though, we’re typically talking about outsourcing to another (often low-cost) location. The services offered by the providers of IT outsourcing solutions include one of the two major options:

The dedicated teams model is a type of outsourcing that aims to streamline remote software development for the client. The model revolves around 100% developer engagement, with remote programmers working exclusively on your project.

Dedicated teams are custom-built on demand. In a dedicated team, developers report directly to client’s managers and work as part of the client’s product team. They work from a dedicated room or office and are encouraged to dig deeper into the company’s vision. In this model, developer demonstrate greater commitment as compared to outsiders.

Bottom line: difference between offshoring and outsourcing in simple words

To sum up, the key difference between offshoring and outsourcing can be reduced to two points:

Sure, the line between the two terms is a blurry one, and the two models overlap in many ways. For instance, having some other company establish an offshore or nearshore office for you is, technically, outsourcing. Besides, working with providers of IT outsourcing services typically implies offshoring or nearshoring your production.